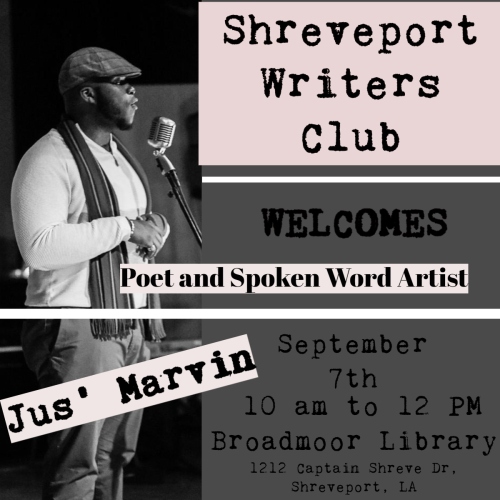 Jus’Marvin is a poet, spoken word artist and actor from Shreveport, Louisiana.  He has performed in Shreveport, Alexandria, San Antonio, College Station and more. His work has been featured at  Write About Now , Bayou City Poetry Slam, Texas Grand Slam Poetry Festival and at Shreveport Regional Arts Council’s Critical Mass.

Jus’ Marvin is the founder of Notebook Assassins, an artist association that encourages collaboration and cooperation.

He will share his work, insights and thoughts about the art and power of poetry during the meeting.

The meeting will be September 7th, 10 am to Noon at the Shreve Memorial Library Broadmoor, 1212 Captain Shreve Dr, Shreveport.

The next Critique Group meeting will meet at the Broadmoor Library, Study Room B, on September 21st, 2019 from 10 am until noon.  You are invited to bring a short piece of writing to share or you may simply attend and give helpful, constructive advice to others.

On Sunday, August 4th, 2019 marked the opening of “Paired Expressions: Visual and Lyrical Art,” a collaboration between artists and writers from the Shreveport Writers Club and the Shreveport Art Club.

The resulting “paired expressions” are on display through August 23rd at the Louisiana State Exhibit Museum, 3015 Greenwood Rd in Shreveport Louisiana. 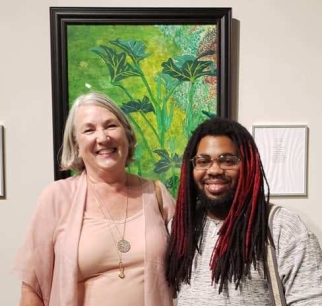 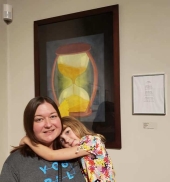 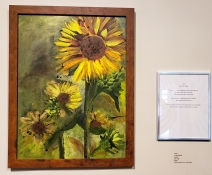 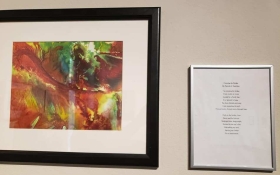 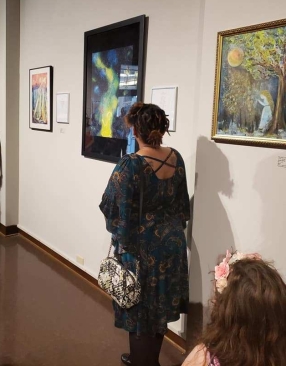 Many thanks to the Shreveport Art Club for helping to make this exciting exhibit happen! Thanks to all the writers and visual artists for their contributions. There wouldn’t be a show without you!

If you are interested in viewing the exhibit, click on the link for directions and opening times of the Louisiana State Exhibit Museum

The next meeting of Shreveport Writers Club will be September 7th, 10 am to Noon at the Broadmoor Library, 1212 Captain Shreve Dr, Shreveport.

The Shreveport Writers Club held their semi-annual Writer’s Medley on Friday, June 7th in the venue space at The Agora Borealis in Shreveport.

The writers shared food, fun and their writing with other members and assembled guests. 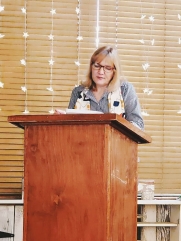 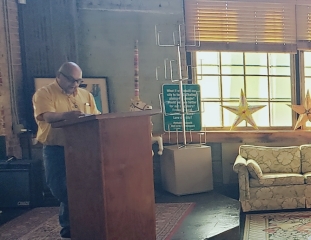 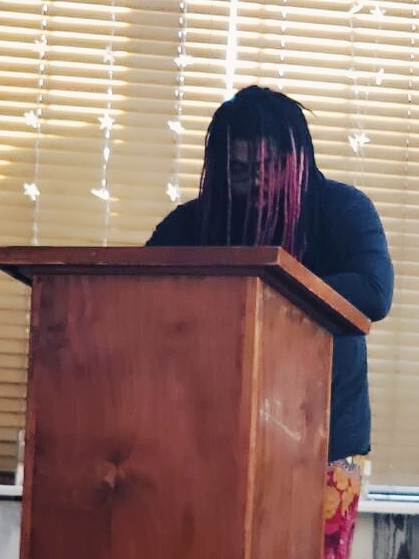 The Agora Borealis provided each reader with a complimentary ink and quill set! 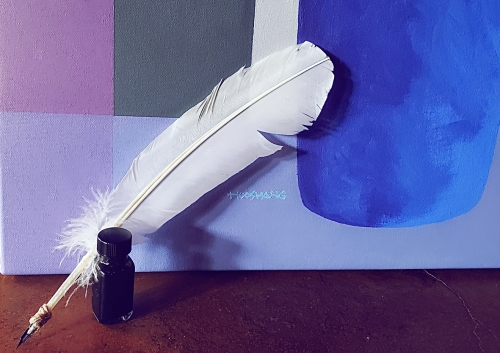 Thanks to the friends and family who came out to support the efforts of local writers. Thanks also goes out to The Agora Borealis for being such awesome hosts!

If you want to know what’s next for Shreveport Writers Club, please come to a meeting. Everyone is welcome! 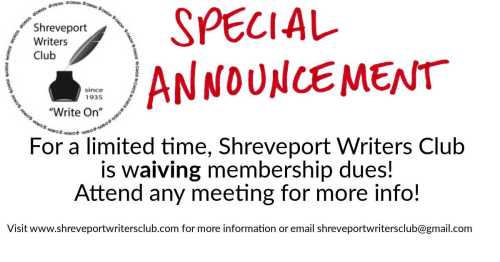 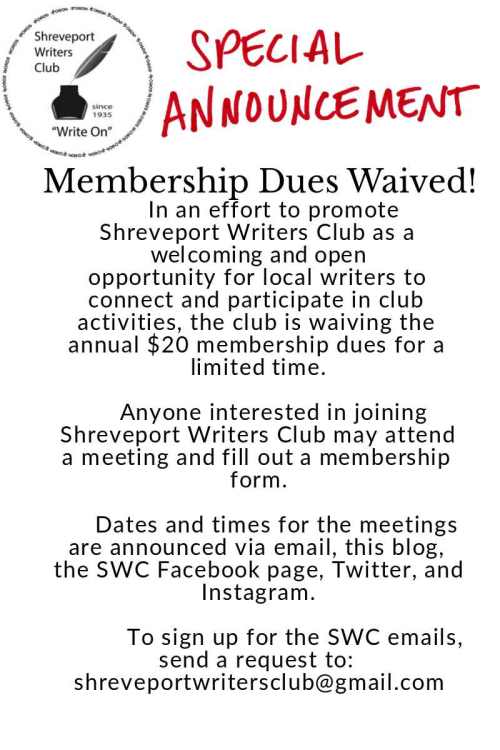 Shreveport Writers Club held their monthly meeting on May 4th at the Hamilton/South Caddo Branch of Shreve Memorial Libary.

Romance author, Liz Talley, was the special guest.  Talley spoke about her beginnings as a writer, as well as how her writing career has progressed over the years. Talley held a lengthy Q and A session with attendees and signed copies of her books afterward. 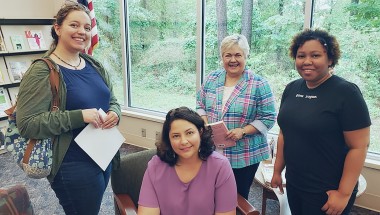 The rest of the meeting concerned regular business, including the upcoming collaboration with Shreveport Art Club. Shreveport Writers Club President, Tiffany Pennywell, gave details on how the collaboration will work. She outlined how club members could participate and promised (and delivered) an email to follow up on the information provided at the meeting.

Pennywell reminded club members that the Writers Medley will take the place of the regular club meeting in June: 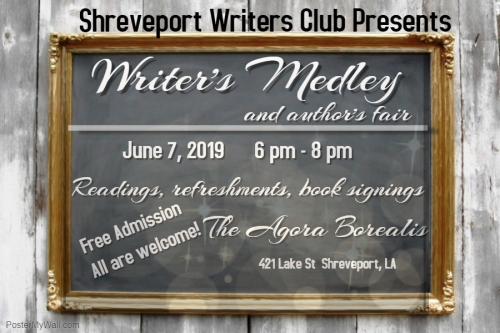 NOTE: Shreveport Writers Club Critique Group will meet Saturday, May 18th, 10 am to noon at the Broadmoor Library Reading Room. Bring a short piece of writing to share or simply come offer supportive suggestions for fellow writers. Everyone is invited. 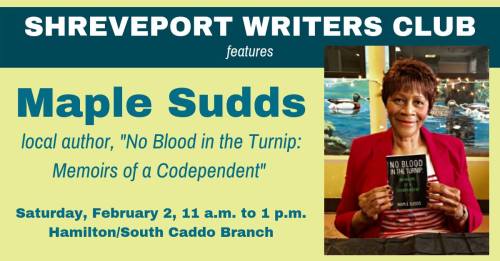 Next month the SWC is changing things up just a bit. We have a special guest! Maple Sudds, author of No Blood in the Turnip:Memoirs of a Codependent, will read selections from her book and hold a question and answer session afterward.

This meeting is at a special time: 11:00 am. It is also in a special place: Shreve Memorial Library–Hamilton/South Caddo Branch, 2111 W Bert Kouns Industrial Loop, Shreveport. The meeting will be held in their lovely reading room. We’re really hoping this open area will invite people in to join us, to hear Maple and to find out what Shreveport Writers Club is all about.

Mark your calendars for this special event!

Remember, you can help promote the club and it’s events by sharing information about club activities on social media OR by simply inviting a friend (or two) to join you at a meeting.

Writer’s of all genres, experience and interest are always welcome. From beginner to veteran, you can find help, support and information at our meetings. Naturally, you don’t have to LIVE in Shreveport/Bossier to come SWC meetings either. If you can make it from wherever you live, you are welcome. 🙂

The Shreveport Writers Club held their regular monthly meeting at 10 am on Saturday, November 3rd. This month the writers met at Retro 521 Cafe in Bossier City.

Club President, Tiffany Pennywell, welcomed visitors and members. The first order of business was presenting the “Making a Mark” awards. Members who submitted any piece of writing to any publication are given a commemorative writing pen as encouragement. Writers this month “making a mark” were M. L. Dumars and Loretta Casteen.

The group then moved on to the Flash Writing Exercise. The writers were asked to write on any of these topics:

After members shared their writing, the group moved on to other business.

The December Holiday meeting location was discussed, but not decided upon. Those interested are encouraged to check back on this site or on the Facebook group once the meeting place for December is finalized.

The December Holiday meeting will include the yearly potluck meal, games, readings and fun.  Special guest for the December meeting will be novelist, Maple Sudds, who will discuss self-publishing her memoir No Blood in the Turnip.

The theme and deadline for the next contest will be announced at the December meeting.

The writers then participated in another writing activity. Each person was asked to write for ten minutes about their “perfect writing situation.”  Afterwards, writers shared their work, if they wished to. 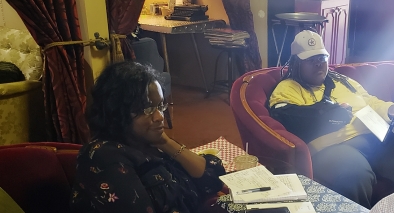 The Shreveport Writers Club Critique Group will be held at Retro 521 on Saturday, November 17th, from 10 am to 12 pm. 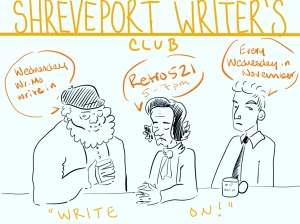 Vice-President, Deondre Holmes also invited anyone interested in evening meet-ups back to Retro 521 every Wednesday evening in November from 5 to 7 pm for critiques, sharing work and encouragement during NaNoWriMo.

The final activity was the Round Robin reading. Anyone who brought writing to share was encouraged to do so.